Share Tweet Pin It
Next Story: a reason to visit Cape Breton (other than the Cabot Trail) →
Posted in Atlantic Canada Birding BEYOND

December 1st was a standout day of sunshine and good birding all over the province.  I saw many reports of great birds today (naturally many for the Mountain Bluebird in Mavilette) on the NSBS Facebook page and on eBird.

It is also the first day of the Winter Birding Season and I was fortunate enough to grab 3 lifers which is interesting way to start, and hopefully a good forerunner.

I have been watching FB posts from one of our NSBS members, Liz Voellinger, who has been doing a wonderful job finding different geese mixed into the Canada Geese flocks throughout Colchester County for the past month or so.  Her enthusiasm about them is inspiring to me, although I have not had any luck up until today.  Typically I can only work a bit of out of town birding into a sales trip and only if I can find enough daylight hours to make it all work.  And that doesn’t work out nearly as often as you would think.   And so it goes, my first stab at the Geese flocks about a month ago was pretty disappointing.   Then on Friday past I had occasion to be near Shubenacadie so gave it another try and failed at the geese, but did meet a nice farmer who let me walk through his poopy fields, and also found 8 Sandhill Cranes on the way without much effort.  You just never know they say. Today I did something I really never do, and took the day off to drive out to have another go at the geese as the ice is starting to form and they’ll head further south any day now. I made a round trip through Meagher’s Grant route for good measure and had a brisk walk in the sun on the Musquodoboit Trailways.  There were lots of Kinglets whistling about but not much else.  But stalking a Kinglet in the sunshine is a gift in December and car birding is not very good exercise  😉

When I got to the Gay’s River Road where I had seen the big flock of Canada Geese on Friday, I was really disappointed to see the flooded fields and pond has frozen over and feared I was too late in the year.  I drove around Shubenacadie for a while with no success.  I was contemplating driving up to Masstown but really had not wanted to go that far.  Just for kicks I pulled over and checked the Recent Rarities page on the NSBS website.  Good thing, because one of our NSBS members, Bruce Stevens had done an eBird report with an exact location so I drove up and couldn’t believe my eyes to see the flock.  I parked at the head of the MacInnis Trail (a good adventure for another day) which shares a parking lot with the new to me and most wonderful Village Bakery.

I was really excited to have found the flock and was actually worried they would fly away as I walked close but they surely knew they were safe and sound behind the fence and stuck around to put on a good show as they say.  The Greater White-fronted Goose was the first thing I saw as it was brown with an orange bill and close to the side of the flock I entered on.  No sooner did I see it and it disappeared into the mix.  There were 400+ Canada Geese of differing species and none staying still for too long and so I knew trying to find the Cackling Goose would be a lot more difficult. 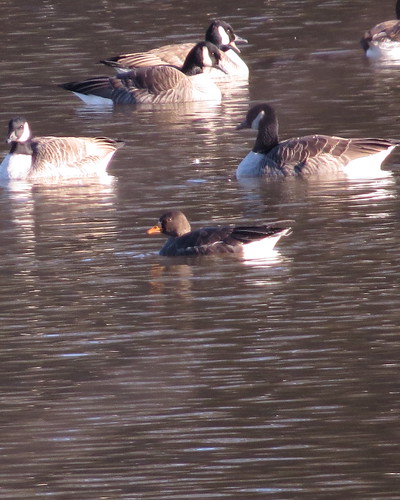 Now, about these Cackling Geese – the whole idea that there are different species of Canada Geese was new to me about 5 weeks ago when all these big flocks started showing up.  I had been in Truro for the day when I saw the eBird report from Jake Walker that a Cackling Goose was spotted in a large flock in Truro so picked up a birding friend and we went to see what all the fuss was about.  Being new to this whole Cackling Goose thing we thought we saw about 40 of them.  We later learned that they were just small Canada Geese.  Oopsy!

A little web research made the whole thing seem entirely hopeless and I expect it will come as a great surprise to many of you as well.  11 species!  Well then my friend said “I hate geese now”.  LOL

Fast forward to today I was super fortunate that Eric Mills showed up with a scope.  I’d never met Eric in person and was happy just for that opportunity as he is a wonderful birder and VP of the NSBS as well.  But here is the thing, he can find that 1 Cackling Goose in his scope pretty quickly and was kind enough to let me see it and a few other birders arrived and he showed them as well.  When you get a good view of one it is true what they say that there is no mistaking them for the other races of Canada Geese.

It was an amazing learning opportunity and I’m glad I followed my instinct to take the day off and study the geese.  Meeting up with other birders only made it more amazing and fun.

I ended the day with a delicious chicken salad sandwich from the Village Bakery, and a plan to pre-order a Butterscotch Pie from Jennifer next time I’m passing through Shubenacadie.  Yummy!