Some people take March Breaks in Orlando but I did lunch breaks, and didn’t too badly for about a grand total of 90 minutes of birding in a 4 day stretch.

I was there for the Global Pet Expo to help my good folk from Auburn Leathercrafters show their booth.

I had high hopes for racking up world lifers at the end of each day, however I forgot that it would be dark fairly early in the evenings and the sun would come up late.   So with little time to work with I just made the best of what I could snag within walking distance on a quick lunch break, a quick break before evening meals, and a brief jaunt before leaving for my flight.

In a twist of fate we were displaying our products on beds designed by Bev at Black Cat Dog Designs, who turns to be an avid birder. So although we were inside the convention center much of the time we could at least compare notes.

My hard core first year in birding paid off as many of the migrants who visit from Florida were wandering about in plain sight and easy to spot for me since I did my homework in Nova Scotia.
,
I had a few target birds from a brief google study I made the night before flying out and on my first day I found one of them in a little pond of reclaimed water across from the Hyatt Regency. He was a great reward after a 9 hour day on the show floor. I’m happy the photos turned out as he cost me a severe allergic reaction to the pesticide in the grass not to mention the weirdness of being spotted sitting in the middle of hotel land in the grass (in a dress at that) by my folk at RC Pets as they headed off to dinner in a group…yes I am the crazy bird lady…LOL. My advice at any rate is don’t sit in the grass in the urban centers, but for me it’s done now and I will never see a Wood Stork in Nova Scotia he is so cool! 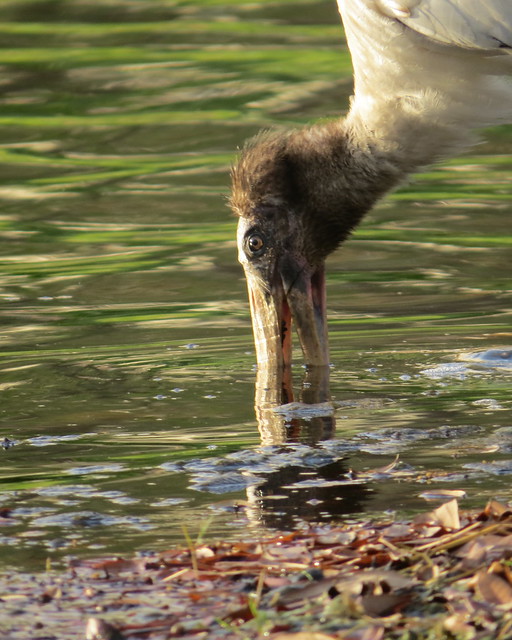 There were many Boat-tailed Grackles and Fish Crows around the convention center at all times and both were new to me so that was kind of fun.  They were mostly flying about and perching high so my photos aren’t great of them but I did catch this fellow in a tree. Also in the pond in front of the convention center I saw my first Tricolored Heron. We stayed out at a house in Davenport in the heart of some orange groves so the Northern Mockingbirds were in good numbers.  Each morning we could hear them from the driveway as we were just heading out as the sun rose and what a sweet way to start our day.

And I quickly spotted a Loggerhead Shrike which looks much like the former on quick glance which is likely how they sneak up on their prey before impaling them.  Yup.  No photos of that I’m afraid.

But the best thing that happened to me was when a Sandhill Crane walked right up to me as I was standing still and all the hair on his neck stood up when he had the gut feeling that no, I am not a light post.

It’s always somewhat disappointing when I can’t make as much time for birding as I would like, but a girl’s gotta work and I feel very fortunate to even be able to get to these wonderful spots for work and catch a little birding on the side.

All in all I had a great time connecting with my friends and coworkers who I don’t see very often. I made some new friends, the trade show was very upbeat and the attendees were interesting and engaged, and I got to do some birding.