Share Tweet Pin It
Next Story: a Louisiana Waterthrush and the case for quiet birding →
Posted in Atlantic Canada Birding BEYOND

of Spring and ticks

No not the crawly kind, but it may be time to tuck your pants into some white socks on that note as Spring is finally here and the Ring-necked Pheasants are squaring off.

The ticks I refer are my Nova Scotia “ticks”, which means the first time I’ve seen a bird in the province.  For me that list is more important than my life list, and I’m only 8 birds short of nabbing 200.

For some time, I sat at 190 and then I went to CSI with my birding friends Diane LeBlanc and Keith Lowe on Sunday and we met up Mark Dennis who helped us find the Oystercatchers and Brant which were both new to me so also “lifers”.  My photos aren’t glorious, but they are mine so I’m pleased for now.

The photos of the humans turned out much better.

I will be leaving for New England on a long business trip this Sunday and had hoped those two species would line up timewise (the Brant and Oystercatcher, not Diane and Keith LOL) before I head out so I could better justify the trip, and so they did cooperate.  CSI (Cape Sable Island) is an enjoyable day trip no matter but to get your target species is always fantastic.  I hope to be back in the summer, but if not then definitely for the Buff-breasted Sandpipers at the Light in September…thanks for the tip Mark!  PS – Mark has created a FREE guide for birding CSI that you can download here.

It’s a little early for things to be hopping at CSI but these three Brown-headed Cowbirds were good fun. Naturally we are all waiting for Warblers.  And the Yellow-rumped are just starting to drop in.  We do have some overwintering flocks but it’s nice to see them dropping in from down South too.  We found about 20 of them at Sand Hills Beach feeding on flies around the evergreens by the beach.  Noisy and happy they were indeed.

I feel fortunate that I will be in Connecticut when their Warbler season is heating up, and back home just before it heats up here.

For now, if I could find an Eastern Phoebe this week I’d be pleased as they are being reported all over.

As a year two birder it is really fun for me to have my first returns of birds since I only just learned what many of them were last year.

My second year signs of spring so far are the Double-crested Cormorant, Osprey, Black-bellied Plover, Great Blue Heron, Red-winged Blackbird, Norther Flicker, Belted Kingfisher, and Ipswich Sparrow (a subspecies of the Savannah that visits us from Sable Island).  Dare I mention Robins and Grackles which we all know and love and have shown up in droves?  I am fairly convinced that I live in a neighbourhood called “Grackletown”. Last week I was dog-sitting two large lab mixes so I didn’t get to do a ton of birding, but I did hone my photography skills whilst practicing photographing small, quick moving birds while holding the leash of two pulling beasts.  I do miss Beatrice and Trigger, but am happy to be hand’s free once again. 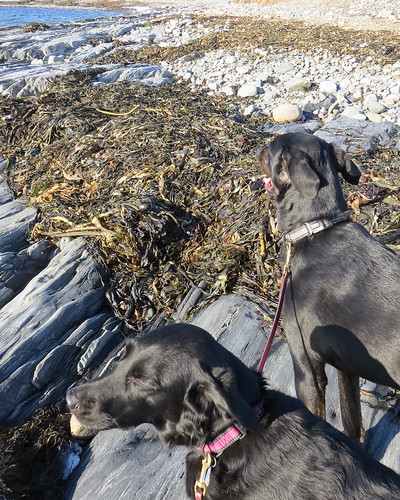 This morning early before starting my work day I walked all over Hartlen Point and although it’s still a bit quiet there, it was lovely to have the place to myself and get a nice show from some woodland birds such as this Junco, and to see my old friend the Osprey for the first time.

For the most part I’m trying to get my “spring ears” back on, and enjoying Mother Nature’s critters.