Share Tweet Pin It
Next Story: the Sewer Stroll in my hood - and the benefits of knowledge sharing →
Posted in Atlantic Canada Birding

the 3rd beach at Crystal Crescent is very “birdie”

I couldn’t resist saying this.  But I will also say that walking the Pennant Point trail to the 3rd beach at Crystal Crescent in the winter is a very different experience than in the summer.

Diane LeBlanc and Sean Dempsey took me birding on their side of the harbour yesterday.  It was pretty icy on the Pennant walk so we turned around after 3km, but not before spotting a great variety of birds.

There were many Long-tailed Ducks, Common Goldeneyes, and Red-Breasted Mergansers with a few Common Loons and Black Guillemots (and a lone Greater Scaup) thrown in for good measure, but the best sea ducks were first spotted by Diane.  Harlequins…always a treat.  And so nice that the water at Crystal Crescent is so clear you can even see their feet through the water. My desire to spot a Common Murre demonstrated my lack of expertise as my potential Murre photo was later IDed as a Merganser by Jim Edsall.  But you know this really does not embarrass or surprise me as I’ve only been birding just under a year, and never seen a Common Murre.  And the cameras these days have the same zoom as a scope so unless a bird is close it’s easy for a beginner to misidentify things especially the way the lighting fools the eye sometimes.

The new cameras do come in handy for things like ID shots of rare birds though such as this late season Palm Warbler.  It was behaving much like a Pine Warbler and that would be a better bet at this time of the year but upon close inspection of our photos it turned out to be a Palm. Much of the time when out birding with friends we laugh because it seems half the time like you’re shouting out it’s a bird, it’s a plane, no wait what is that?  At all levels of expertise people can’t always be certain of all sightings.  And that is half the fun.

On this sunny winter day on a coastal hike we were also treated to a nice show of Snow Buntings and Pipits.  Field birding can reap many rewards and even when you see nothing, isn’t it wonderful to be outdoors? 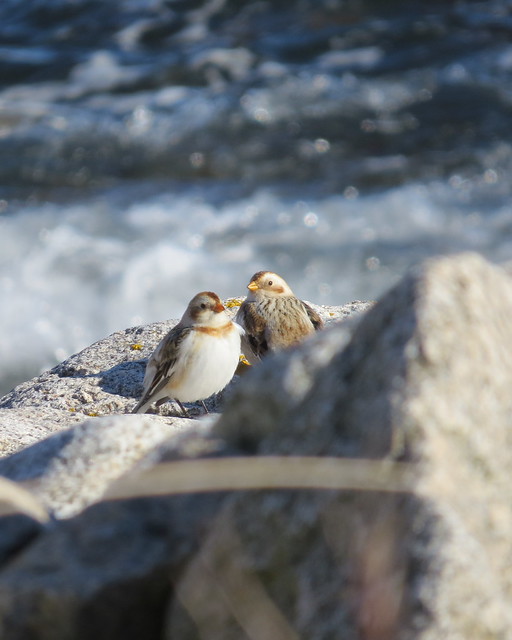