Share Tweet Pin It
Next Story: My 100th bird for my 1st winter list was a raptor which is very fitting I believe →
Posted in Atlantic Canada Birding BEYOND

Year 2 in birding – a Towhee, and the return of the Black-headed Gulls

It was last year in February that I really delved into the bird nerd world.  Starting in winter is likely not the way most people start, but for me it means that the month most people consider to be a bust in Nova Scotia birding has been really special for me.

One of the things that make Year 2 in birding great is seeing returning migrants.  And I was really happy to get views of the Rough-legged Hawk last week at Hartlen Point who comes to Nova Scotia for the winter. Not too many years ago homes had field guides and Robie Tufts books full of handwritten notes and dates with the birds seen each year.  And the old ways of doing things should never be forgotten in my opinion.

The winter has not been cold enough to be locked up reading books, but I digress.  Every advanced birding book will tell you that you can’t look at a photo of a bird and go in the field looking for it.  Birding does not work like that.  You need to learn the shape of birds, their features, plumages, behavior, and preferred habitats.  I can’t argue the convenience of posting a photo to an online group and having it immediately identified, but I am learning way more since I decided to advance my own skills and make my own efforts.

My notes are not handwritten but they are still being written, much of which I share here in the interest of encouraging others.  And eBird tracks all my sightings and logs them as parts of their “citizen science” project.

So armed with a wealth of digital information and books as a new birder I feel fortunate to have so much available to me.  Fortunate is also how I feel that other birders will share their knowledge in the field.  A group of us went to the valley last week primarily to enjoy the sunshine and exchange ideas, but also to find the Eastern Towhee that had been hanging about.

I found a great article a while ago about birding photography and letting the birds come to you which reiterated what I’ve already figured out.  You have to learn the birds, study the birds, and once you know their behavior you can get their photographs.  As a newer birder I’ve many times photographed an uncommon bird not knowing what it is at the time but there is little satisfaction in that for me.  That being said my “snap everything” approach landed me a photo of a Broad-winged Hawk which is uncommon in Nova Scotia at this time of the year.  The people I was with knew it was something other than a Red-tailed Hawk but I was completely unaware and just shot it and moved on to other things.  The after study will help me to recognize one down the road though, perhaps this summer when they are more commonly around.

There is a joy in recognizing the bird and happening upon it naturally and nabbing the photo.  Or getting better photos of birds the second time round.  And third and fourth, you get the picture.

And I got the picture of the Towhee.  It was my first in Nova Scotia but my 3rd sighting as I’ve seen them in Maine and because of that I was able to spot the bird in the bushes and anticipate his behavior.  My first 2 attempts to photograph a Towhee were photos of bramble and the reward is this clear photo. 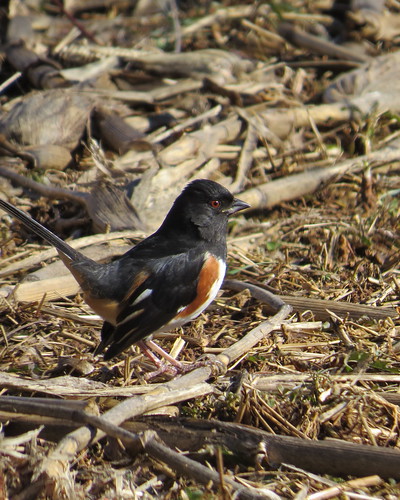 And so it was also this February that I found a large group of Black-headed Gulls in the same place I first saw them last winter and realized with a big smile on my face that they come every year to this spot.  This year I didn’t photograph them and go home later and study photos on the internet and field guides trying to figure out which of the “little gulls” they were, I knew right away.  This year I was able to recognize 3 different plumages, and enjoy their noisy calls and antics. For certain year 2 of birding is going to be amazing, although if I’m this excited now I’m going to lose my mind next month when the Warblers arrive!

PS – here is another assortment of Gulls in varying plumages I have photographed in an attempt to let them wash over me as they say.