a weekend in the Cape Breton highlands

Approximately 30 intrepid birders descended upon the Cape Breton Highlands this weekend for the Nova Scotia Bird Society’s out of town meetings and field trips.

For most of us I imagine it was a life changing experience to forest bathe in the company of so much knowledge. For me, it was also a chance to commune with my Cape Breton birding connections. I thank David McCorquodale for not only his knowledge, but making sure there is always strong coffee for his fellow birders to start the day off right. Seriously though, if you wonder what the birds are eating in Cape Breton you must chat with Dave about the insects and trees, he has a wealth of expertise to share about habitat and bird behavior.

Great skill aplenty in my little group, it was delightful to have the company of Laura Saunders and Bethsheila Kent. Laura has wonderful ears for birding, fantastic information about local breeding birds and habitat, and a great sense of humor and fun. Bethsheila shared her vast horticultural knowledge and passion for fauna, most notably delighting many on the group walk at the Bog trail with typical Bethsheila zest!

How these three great spirits could tolerate my incessant whining about not getting a photo of a Moose or finding my first Spruce Grouse is beyond me. A testimony to their gentle nature I suppose.

Surrounded by so many wonderful spirits from around our province this weekend, we were somewhat like a group of large children let loose in the playground.

Anyone who knows me knew that my targets for the weekend were to see my first Spruce Grouse, and to get some closeup photographs of Moose.

Friday night David McCorquodale took us “moose hunting” around French Mountain as the sun went down and we witnessed a young calf in the river with its mother. Distant grainy shot from the road looking down but such a wonderful and tender moment we were privileged to witness.

There was a walk scheduled very early on Saturday morning (330AM in fact) on the Skyline trail to look for Bicknell’s Thrush that I chose not to join, and of course the group had an amazing display from a male Spruce Grouse fanning its tail and defending territory, and a very close encounter with a Moose!

That’s okay, I’m frequently punished by the universe for sleeping in, so I say you all earned it for rising early, and I’m delighted for you all to have had this wonderful experience.

Later that morning Bethsheila and I were tipped off (thank you B) about a group of Bay-breasted Warblers moving through the lower parking lot on the Skyline. Although I did not find a Spruce Grouse this time, it was wonderful to watch those birds feeding on the Spruce trees. I’ve never seen them in breeding plumage before, and they are outstanding to observe. It’s amazing how they camouflage seamlessly in their habitat.

There were also several Black-throated Green Warblers in the area who are also masters of camouflage as all birds are.

And I never tire of the Maggies.

I joined the NSBS group for a guided walk on the Bog Trail. We were accompanied by park interpreters who helped identify many plants in and around the bog. We had many of our own group on the walk who also had knowledge and/or interest in the Fauna. Amber and Bethsheila spent a lot of time mucking around investigating with great curiosity which was great fun to witness.

As well I spent a good portion of the day whining about not seeing a Spruce Grouse and trying to figure out if I would join the group in the evening or hit the Skyline again to find one.

In the end, I chose to venture up the Skyline myself after supper. Even though I visit Cape Breton quite a bit, I rarely have this opportunity as my Border Collie, Macy, is usually with me and dogs are not allowed on that trail even on leash. This is a rule I support firmly as dogs can agitate wildlife and Moose and Black Bear are frequently spotted on this trail. I don’t really like taking her in the park at all, and the few times I have hiked in the Cape Breton Highlands with Macy I was nervous to venture very far into the woods with her. I prefer to be with other humans or alone and alert for wildlife encounters. I had a close encounter with a Black Bear in Newfoundland a few years ago in Gros Morne which was amazing. Other people came behind me a few minutes later but I was the only one who saw the bear. Alone and silent, it crossed my path.

Anyway, off I went with great faith that I would see a Spruce Grouse as pretty much everyone else in the group saw them every time they went up the Skyline.

My plan was to go as far as the Moose enclosure and then turn around as the terrain changes up there and becomes less hospitable for Spruce Grouse. No luck. But my heart almost stopped when I realized there was a Moose about 20 feet away from me by the enclosure. Serendipity has long been my best friend in nature, and I knew why I was there at this very moment in time.

Long lens in hand, I quietly maneuvered about the Moose working to get the light behind me. I kept my distance, but it was not long at all before tourists arrived on the scene and started taking selfies. A park ranger appeared after a while and helped corral the humans away from the Moose, but people really didn’t seem to understand the threat to their safety. I hung back giving the Moose and the crowd a wide berth and continued to try to get the light in the right position for photos. The Moose did as it wished, so patience was required, and I just had to put in the time and wait for it to get into position for photos. Several times I told people they were too close, and they were irritated and said they were fine. FYI Moose attack more people than Bears and Coyotes combined and although docile when not threatened a circle of tourist taking selfies is a bad situation. Thinning the herd, I believe they call it? Anyway, the Moose started scratching the ground with it’s front hooves and snorting and wagging its head so me and someone else with common sense moved in the other direction using trees for cover.

After the park ranger finally convinced the stupid tourists to shove off and give it space, the Moose relaxed and got into the perfect position. Were I alone and in a better opportunity to choose my camera settings and perhaps with a tripod, I could have the perfect shots, but for me this is a highlight of my life and I’m very pleased with the results given the situation. 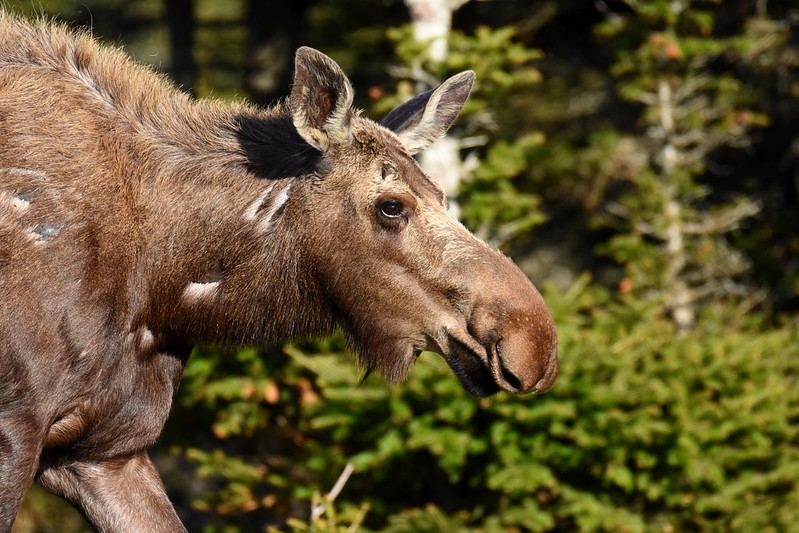 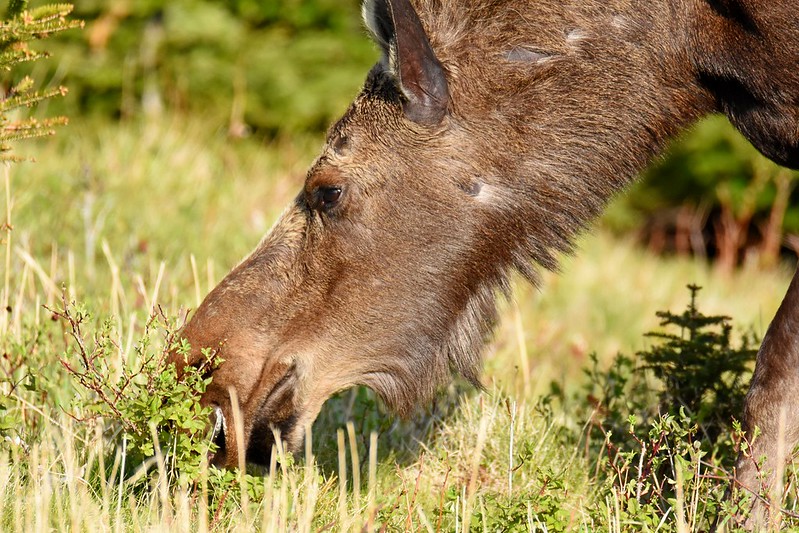 I do feel like my time on our friend’s farm as a child helping to herd the dairy cattle was of great benefit in this situation. Understanding the behavior of wildlife and birds is the only way to get close enough to get the real shot.

You couldn’t wipe the smile off my face for hours, even though I dipped on the Spruce Grouse yet again on the descent.

I then joined many of the NSBS members on their adventure to listen for Bicknell’s Thrush at sundown at Benji’s Lake.

Although not heard, this was an amazing group outing with many big shoulders of our birding community. The kind of people who lift you up into the birding stratosphere as our dear Eric Mills has done for so many of us.

And our new fearless magazine editor in chief, Alix d’Entremont.

Although you have BIG shoes to fill, we all know you will succeed as you are already on the path of the great birders in our province.

The group decided to try one more time on Sunday morning, but you can already guess I decided to hit the Skyline for another shot at the Spruce Grouse, right?

Dipped again but had a lovely walk, entertained by Pine Grosbeak, Ruby-crowned Kinglets, and Pine Siskins, none of whom are present in good numbers in my neck of the woods so how can I complain really.

And so, I headed up to Benji’s after and didn’t see anything different but enjoyed the terrain and the company. Laura and I were quite certain we heard a Spruce Grouse land in the bushes right about where Dave said he often sees them, but we waited it out and never saw it. In retrospect since we couldn’t sight it maybe that one was a female as it would be harder to spot…nonetheless another dip in perfect habitat!

Time for checkout, but I decided on the way back we had to make one more attempt for the Spruce Grouse before leaving the highlands, and it was well worth being 20 minutes late for checkout time as Mr. Handsome finally made an appearance. 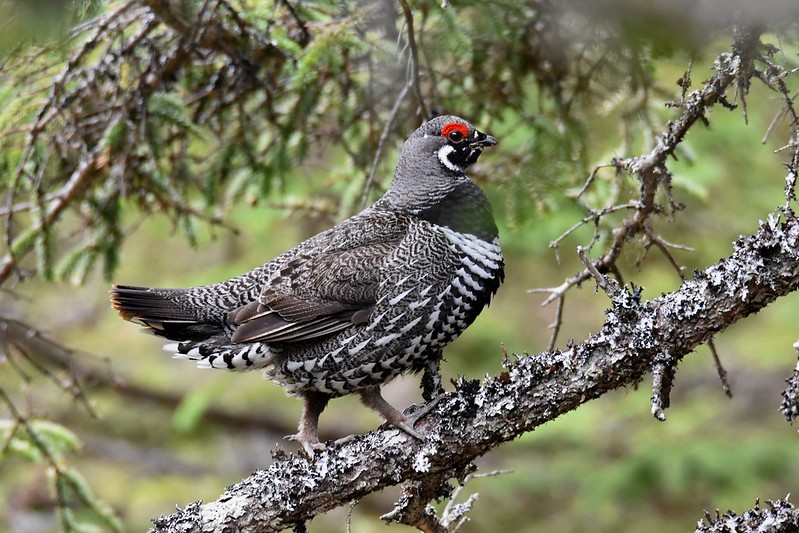 I will say, this was well worth the 4-year wait to see as I have chosen not to twitch them 2 hours from home and wait for a sighting in the highlands as I knew the day would come eventually.

Although my focus was different than many in the group, please know that you were also my focus.

Spending time in the field with great birders is a true privilege and a pleasure. It was wonderful to connect with so many birding friends and make new ones.

Thank you to the volunteers from the Nova Scotia Bird Society who worked to make this wonderful out of town meeting a reality. It was truly a life changing experience.

Yours in birds,
Angela

2 thoughts on “a weekend in the Cape Breton highlands”