Share Tweet Pin It
Next Story: in pursuit of the Tufted Duck - Cape Breton chapter →
Posted in Atlantic Canada Birding

birding in Louisbourg  – and my first Northern Shrike

Winter really reminds you that you need to make the most of good weather and get outside whenever the opportunity exists.

My birding friend Alicia Penney had arranged for us to meet up with David McCorquodale and a few other Cape Breton birders on Saturday morning.  But as stormageddon approached, we knew it would have to be cancelled for that time.

Lucky for me, David was able to spare some time for me this morning for a little zip out to Louisbourg and although it was very foggy we had great luck.  It certainly was a great opportunity to bird with the co-host of the CBC Cape Breton Bird Hour and most appreciated, thank you David!

The first bird we spotted was new to me (a Northern Shrike) and put on a good little show for us as they tend to do. The rest of the fortress area was a bit of a bust as the seabirds were not visible in the fog, the Boreal Chickadees were too nervous to show themselves, and we apparently got there too early in the day for the group of Gray Jays who visit the commissionaire.  Nonetheless a Shrike is a great bird and made it all worthwhile.

We made a quick visit with Bill and Diane Bussey while in town whom I’d not met and it was great to meet some very fine local birding folk.  Perhaps someday I’ll be in Cape Breton for their Christmas Bird Counts and join in on some of the local fun.  I was very pleased to also find out today that the Cape Breton birders are still very much connected to one another and communicate with each other about the local finds, and organize field trips when they are able.

We checked a few spots along the harbour and amidst the usual suspects we were lucky enough to find a Thick-billed Murre.  Another new to me bird, and not a bird anyone sees regularly close to the shore.  It was clearly much larger than the Guillemots that were around and dove deep and showed a clean white belly on the way down.  David had a scope with him so we able to get a nice view of it a few times in between dives.

Off to the lighthouse we went where at first we weren’t certain we’d even be able to find the Harlequins in the fog but eventually we found a group of 7, a Black Scoter mixed in the Eiders, and a small group of Purple Sandpipers put on a lovely show high up on the rocks. 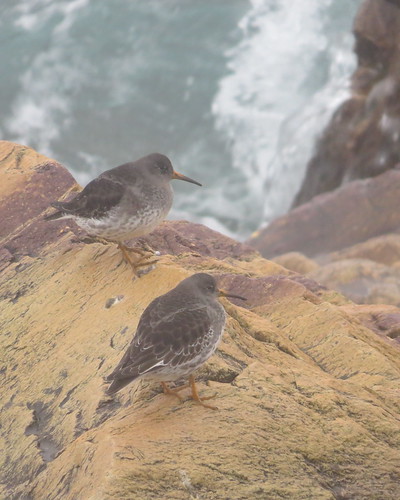 Although the weather seemed disagreeable when we set out it all turned out great.

The storm is in full force now and I have work and family stuff for the rest of the weekend but I am hopeful that I might get a chance to see the local celebrity, the Bullock’s Oriole, before I leave the island and perhaps get a better photo opp with the Tufted Duck and Barrow’s Goldeneyes.

If not, I can certainly say that the birding time I did have so far was more than enough and I am thrilled at how it’s all turned out so far.

Time to hunker down with the birds now the wind is going up to 100KM tonight and the lights are already flickering!