Share Tweet Pin It
Next Story: birding in Louisbourg  - and my first Northern Shrike →
Posted in Atlantic Canada Birding

Our family event was postponed due to the weekend storm so I ended up with a little extra time this weekend to get 2nd looks at the very handsome winter ducks in Westmount and Glace Bay.

Yesterday I went back for another look at the Barrow’s Goldeneye ducks near the Dobson Yacht Club.  They were mixed in with a group of Common Goldeneye ducks and altogether there were over 50 Goldeneyes.  Without a scope I really couldn’t count the Barrow’s but I’d say about 1 in 3 was a Barrow’s at a rough guess.  A fair bit of hanky panky was going on and boys of both species were in hot pursuit of girls of both species.   It looks to me like some hybrids are in the group which would make a lot of sense since the Barrow’s have been coming here every year for many years from what I witnessed I think those boys will grab whomever they can  😉 Today I took another run out to Glace Bay to see if I could get a closer look at the male Tufted Duck who is mixed in with a large group of Greater Scaup (and a few Lessers).  As luck would have it he was right in with the fishing boats and I also bumped into local birders extraordinaire, Tuma and Nick, while I was stopped which was a nice surprise.  I’m quite happy with my photos, but I know Tuma and Nick will have photos which are in a completely different league then mine.  Nice to see you guys and can’t wait to see your pics! I wasn’t certain I would get time to stop in on the Bullock’s Oriole at a time with Sue and Gordie Gosse would be home but it did work out after all.  I picked up a bottle of Smuckers Grape Jelly and dropped by for a quick show.  Thank you for being a great host of this little visitor and being kind to many birders.  Not everyone would welcome people to their yard to photograph a bird.  As promised, he did make an appearance.  Gordie pointed out the dark spot on under his chin which distinguishes him from a Baltimore which was great as I always like to learn something new on each birding adventure. 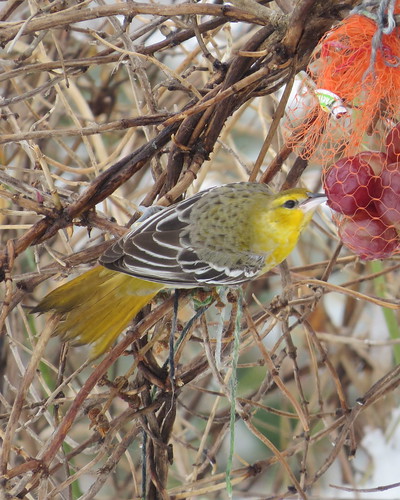 Will be a little sad to leave Cape Breton but also will be happy to get back to my birding friends in Halifax and familiar birds of Eastern Passage.