Share Tweet Pin It
Next Story: A way for birders to help with homeless dogs and cats in Northern Greece →
Posted in Atlantic Canada Birding BEYOND

My intention was not to spend much time birding on my trip of a lifetime to Greece this September, but yes I packed the binoculars.

Lots of beaching, eating, and relaxing was on the agenda with a little bit of birding to be mixed in.

I had the flu last winter and was down for a few weeks, pretty much bed ridden for a lot of that time and began dreaming of better times.  And decided that my dream trip needed to be in the near future.

Armed with the internet, I printed out maps of Greek Islands and all the international airports and ferry routes and started to plan a little island-hopping vacation.

Things were pretty much par for the course until I saw a photo of a Dalmatian Pelican, and my plans came to a screeching halt.

Back to the drawing board.  These endangered birds are not found in many places in the world but turns out they are quite plentiful in Northern Greece.

And so, my trip changed entirely to hanging out on one island and then flying up to Thessaloniki to rent a car and hit the wetlands of Lake Kerkini.

I will note that I would prefer to never drive in Greece again, so hopefully next time I go birding in Northern Greece it will be with a group of friends and a braver soul can take the wheel.  But, it was a personal achievement and they say you should do something that scares you every so often.  Uh huh.

I had reviewed eBird reports to choose my dates and locations.  Honestly, this was not the best time of the year for the birds, but not that bad.  I also wanted warm ocean swimming and for the tourist season to be over.  All this left me with 4 target species (Bee Eater, Dalmatian Pelican, Eurasian Spoonbill, Hoopoe) and 1 that I thought might be still around but was in fact gone (Rollers).

My first target was found in Antiparos quite by accident.  My 4 sleeps in Paros were not really intended to involve any birding, but you and I know we are always birding.

In good tourist fashion I took the ferry to Antiparos for the day to sight see and explore.  Mostly I was taking snapshots for the folks back home, but I did pack the telephoto lens in my daypack just in case.

Wandering as I do, I happened upon some good scrub and figured it would be great habitat for migrants and after spending some time trying to figure out the new to me Hooded Crows, I continued with my big lens attached.  Because I was switching lenses and photographing a variety of things I had a massive camera fail when the most beautiful of my targets appeared.  I could not believe my eyes when a Hoopoe appeared right in front of me on a foot path to the beach.  And because I had VC turned on, I missed the shot.  You just can’t focus fast enough on the fly in the field to catch surprise birds that are moving.  And your serendipitous target bird rarely stays still.

I must say though seeing one of these guys in person on the way to check out this beach was still a highlight of my life.

Several new to me birds were also in the area, such at the Crested Lark and Sardinian Warblers

Back to the business of touristing I went, and visited a number of villages during my stay in Paros.

One of these was Aliki, where I was actually hoping to see birds.  Aliki has a good salt pan behind the tourist beach that I had read might be dried up at this time of the year.  Ummm…might be dried up.

A spring visit is required, not recommended in my opinion…LOL

Gorgeous beach though, and fun to see the Octopus hanging on the lines to dry for the restaurants.

Although the pan was dry, I still found a couple of lifers down the shore and had a nice cool off on my hike.

After much relaxing and twice a day swims, I was ready to head up north for the rest of my target birds, and the mighty Dalmatian Pelicans.

The drive from Thessaloniki was only bad for the first 20 minutes (just google driving in Greece) before the landscape changed to farmland and the first birds appeared.  I had no time to stop as I was fighting daylight, but it was a group of about 25 small hawks which were most likely Kestrels.  As I continued toward Kato Poria the mountains slowly rose around me as the sun settled in a soft glow.  The hotel was not far off.  I landed in complete darkness and awoke to the same the next morning.

The drive to the boat launch was just before sunrise, and once we launched the sun began to rise, right on schedule.

We were immediately greeted by a large group of terns, gulls, and our first celebrity pelican.

Not long after the Pygmy Cormorants made their first appearance, and then the show began. 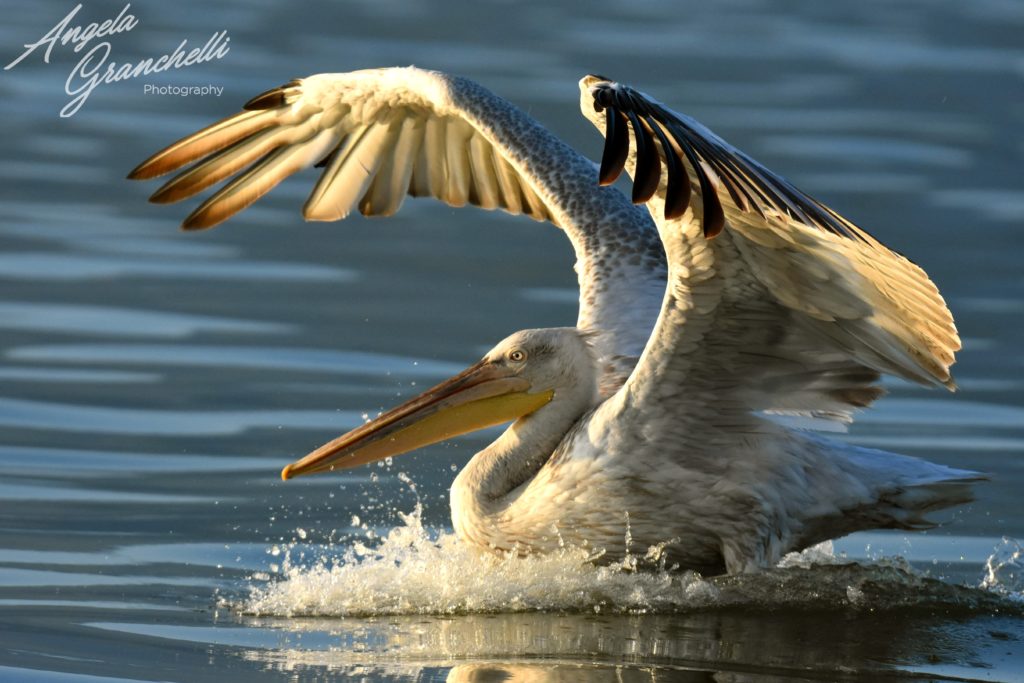 Dalmatian Pelicans are a pretty tough act to follow, but the large flocks of White Pelicans, Greater Flamingos, and Eurasian Spoonbills were a very decent second act.

There were several other interesting birds but honestly for me the big waders were the main event.

The boat tour would have been enough for me, but of course I spent the rest of my day birding around Lake Kerkini.  It’s so beautiful there that many Greeks visit in the summer just for a vacation, and not to bird at all.

There is a lot of ground to cover and although I was delighted to see the Water Buffalos in Vironia, I felt I hadn’t spent my time well and wished I had more of it.

The next morning, I was going to drive back in to Thessaloniki to spend the day touristing, but watching the news over breakfast I noticed there were large groups of protesters and police officers in the downtown area and figured that was not the thing to be in the middle of.  I changed my hotel to be closer to the airport and decided to spend some extra time in Lake Kerkini.

Although it was not the original plan, it was just perfect.  I meandered around on my own schedule with some knowledge of the area from the day before and found all the birds I missed the day before.

Happy in my soul, I promised to return…next time with friends.