Share Tweet Pin It
Next Story: the little prince of Cow Bay had to leave his beautiful seaside home →
Posted in Angela's Dog Blogs BEYOND

In early September this year, I spent a glorious week in Greece.  I spent some time in urban and touristy areas on an island, and a good spell in the countryside up north.  Everywhere I encountered homeless animals.  Both cats and dogs.  This is not something that is specific to Greece, it happens in every country but since I took the time to slow down in Greece and study many things, I have some observations and ideas that may be helpful.

My intention is not to pick on the wonderful Greek people.  I met so many kind and lovely people in my travels and overall my view of Greek people all my life has been positive, and only reinforced by spending time in their country.

Back home in Nova Scotia I have seen very similar situations, although not very much in the last 5-10 years since the Nova Scotia SPCA has increased powers and patrols and TNR has been adopted across our province.

Also, at home I have done my fair share of fundraising and advocating for animal welfare, so as I hopefully intend to return to Greece many times it is a place where I would also like to do some good for the critters.

My hope and intention is to build a bridge between like minded people from my home and away that will give me even more reason to return and do something meaningful when visiting.

In the urban areas the dogs seem to be dumped dogs which is really a shame.  I saw many single breed dogs running down the streets looking frantic as dogs are social creatures, so they were clearly very upset to be abandoned.  That is heartbreaking, and any person who would let their dog go in the street to fend for itself is heartless in any country and this does happen in every land unfortunately.  I do wish I had taken more time before leaving for my trip to get the information for local shelters and rescue groups, so I could alert them to abandoned animals.  In the future before I travel to any place outside of Nova Scotia I will make sure to familiarize myself with these organizations.  At home I know all the phone numbers to call and do call all the time when I see dogs wandering on my travels.  So, no reason not to do the same everywhere I go.  In fact, sometimes they have just gotten lost or run off on their owners and need some help getting back home.  On the topic of dumped dogs, the one thing that really aggravates that situation is the unscrupulous sale of puppies and kittens in pet stores.  We have banned that practice in Nova Scotia and it has had a profound effect on pet overpopulation.  In an extremely positive way.  It is a pet peeve of mine that people put profit before the welfare of animals.

Anyway, I do know the urban areas are most likely to have resources in place, and the problem of dumped dogs will not be addressed until sales are regulated so that will not be my focus.

I will say that most of the dogs I saw running loose in urban areas were clearly purchased dogs as they were single breed dogs such as the German Short Haired Pointer I saw roaming downtown Antiparos, or the frantic Bichon Frise running downtown Parikia. 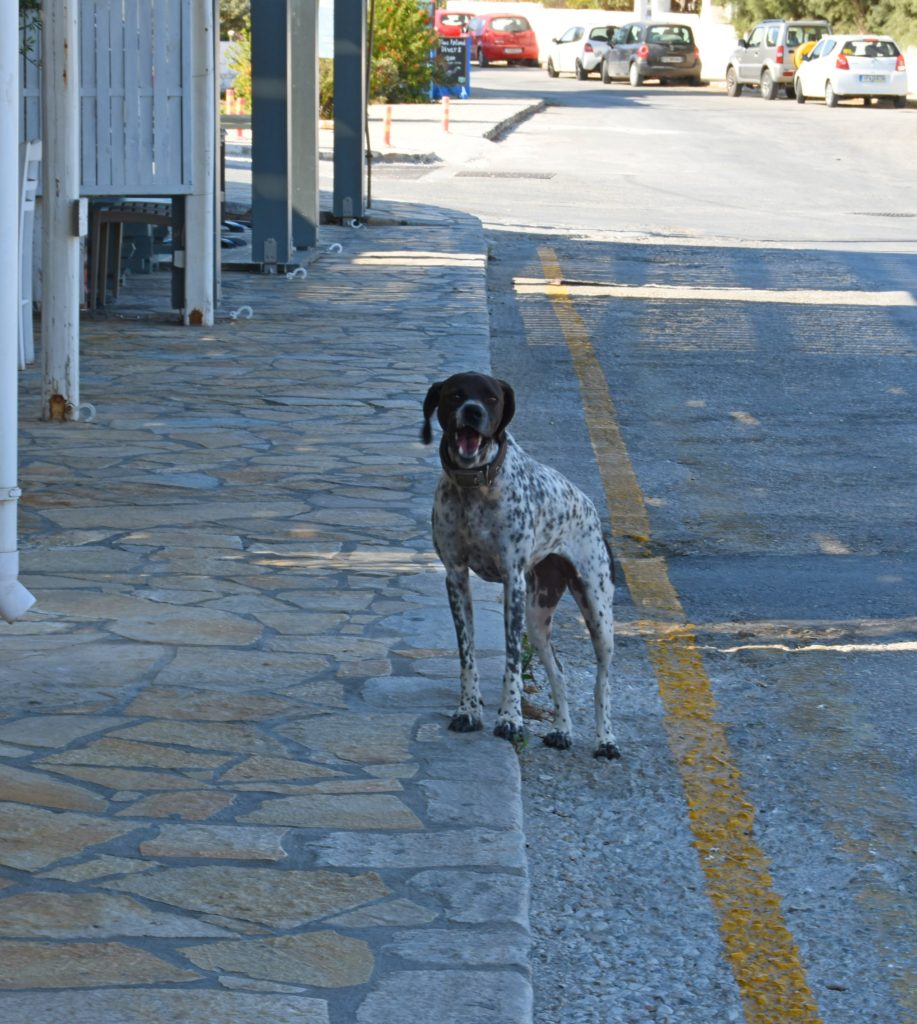 The dog I saw roaming in Lefkes didn’t really worry me as the cars drive very slow there so no real danger to him in that respect.  But those other two in areas where there was a lot of traffic are goners if someone doesn’t get them off the streets.

Homeless cats seem to fare better than dogs in some ways only because cats are independent and don’t mind flying solo, whereas dogs enjoy the company of other creatures, dog or human.

Both the cats and the dogs encounter the same major problem though, cars.  As countries modernize and roads get better, cars go faster and there are more of them.  This is very dangerous to free roaming cats and dogs.  I spent 2 days birding in the Kerkini area of Northern Greece and in that short time saw 2 dead cats, 1 dead dog, and 1 injured dog and had to jam the brakes on numerous times to avoid hitting one myself.  That was in a very rural area so proportionally that is quite shocking to me.

I do recognize that a life running free can be wonderful in many ways, and that would be lovely if cars didn’t make that so dangerous.

Overall people seemed to treat the homeless dogs and cats with kindness.  Many people feed them, and I did not witness anyone being cruel or mean to them in my travels.  There are just too many, and no homes available for them.  Even though they are being fed, their meals are not nutritious, and they don’t look healthy.

Herding breeds are the most prevalent in the rural, agricultural areas and I do understand that these dogs will not all be neutered and will live outdoors and work.  They are fed and owned and doing fine overall.  But some of them will have litters of puppies who are unwanted and end up roaming and homeless.

The mother of a recent litter of homeless puppies had red eyes and appeared tired and weak. 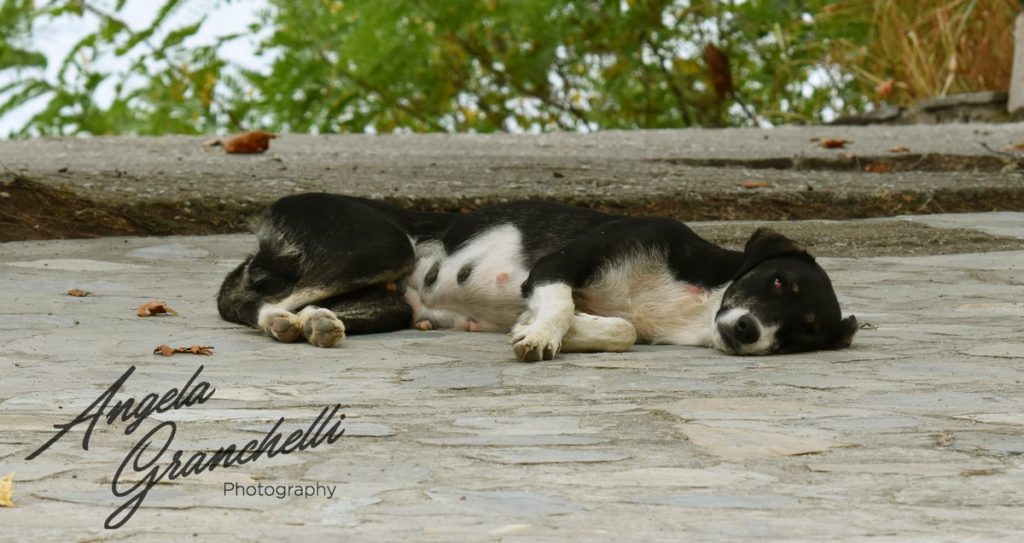 Her puppies are being raised outdoors, and not at the farm she came from.  So, they are homeless and she is not getting the care she needs.  They are social with people but if they are not spayed or neutered they will also have puppies, and if there are no homes for them how will their puppies get homes?

Thessaloniki is only a little hour away and is a big city of a million people so there must be clinics and organizations who could help.

It would also be great to have a little angel fund to help dogs like the one injured one who haunts me still and is the reason for this post.

When birding in Vironia I saw a pack of herding dogs tending the Water Buffalos.  One of them was lagging, holding a broken paw in front of him.  He was in great pain.  I assume he was hit by a car and never taken to the vet.  Perhaps that is not what happened, but it was clear that he was suffering greatly.  It crossed my mind briefly that he was getting by somehow and just not fast enough to keep up with the pack, so it wasn’t that bad but when I got home and zoomed in on my photos my heart broke. 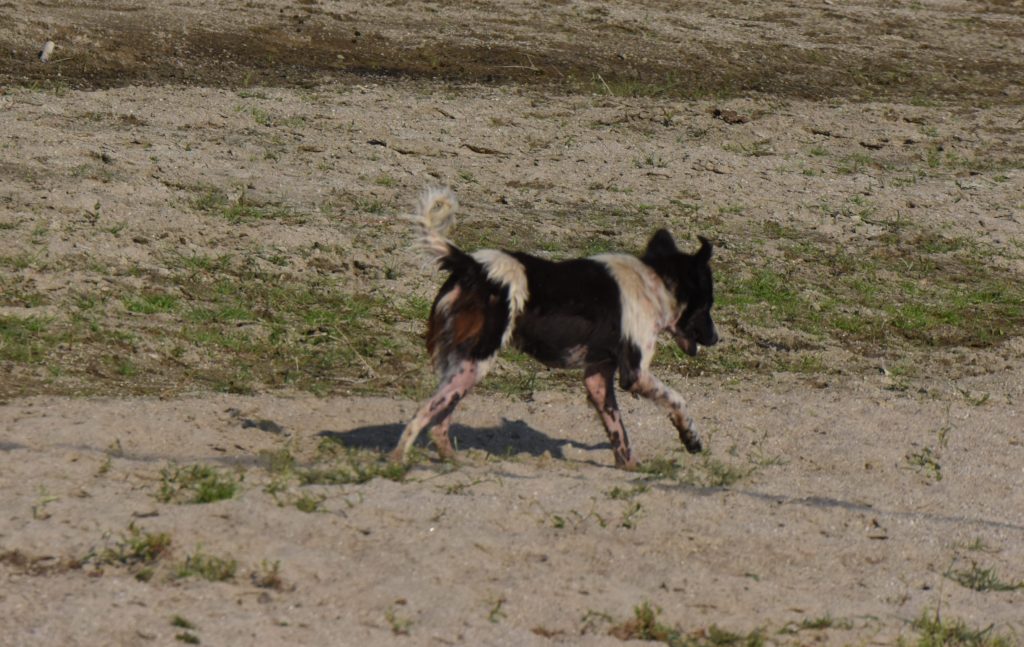 There is no fur on any of his legs.  All the other dogs in the pack have fur on their legs. 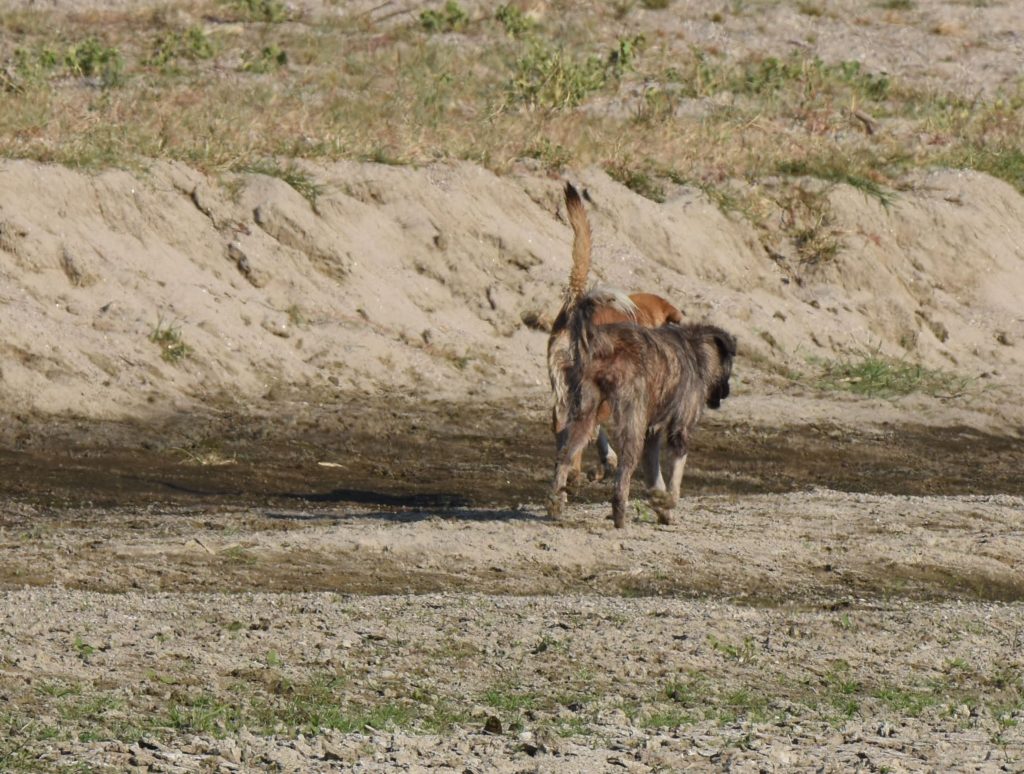 It is not mange or a skin disease in my opinion.  I believe he has chewed the fur off his legs to deal with the pain of his unhealed injury.  Many times, since I left I have wished I could go back and do something about it.  It may be impossible, but I am hoping someone in the area could help get him to a vet to be treated.

I do not wish to attribute blame as the cost of the vet may be more than the farmers can afford.  He may not even be their dog.  I just wish we could make him comfortable.  I realize that many people and animals suffer, and you can’t help all of them but to help just one matters I believe.  Well it sure does for the one you help.

Likely I will not be able to organize anything in time to help that dog, but those are the types of angels I’d like to find a way to raise funds for.  I’m just not sure how to go about it so ideas are welcome.

Perhaps I can trade trip planning and birding advice for the region for a donation to a designated fund?

I found this great page on Matt Barrett’s Greece Travel Guide (a site I visited quite a bit before heading to Greece thank you Matt!) and will start reaching out to existing organizations for ideas before trying to tackle this on my own of course.

I’m sure there are people in place who can help if they are alerted to problems and they would benefit from donations to their funds to help.

Birders like myself, have great powers of observation and cover a lot of ground in search of birds so are in a perfect position to help.

This is also why my focus will be the Kerkini region and surrounding areas.  Lake Kerkini bosts 300 species of birds and is an amazing place for birders and nature lovers to visit.  I will have a separate blog about the birds and my adventure in this beautiful place.

I think birders are in a special position to help the homeless dogs and cats and that overall, people who love animals love all animals.  A very organic partnership could evolve here without a lot of trouble.

When you know better, you do better they say.

Just knowing where to direct donations, or who to mobilize on the ground would be very beneficial.

Clearly it is not practical, and perhaps even wanted, for tourists to take it upon themselves to approach or collect homeless animals in another country.  Local people need to be involved for this to work.

So, let’s find some local people in Northern Greece we can work with to identify animals in need that we see when we are birding in this amazing natural landscape.

If we could start by finding a way to reach out to the locals to get the dog with the broken leg to the vet, I would happily try on my end here in Nova Scotia to raise funds to help.

It took me a while to write this post as it wears heavy on my heart, so I will be happy now to allow myself the freedom to write some birding and travel logs of my amazing time in Greece where I fell in love with the people, the food, and the beautiful country.

I would really like to put a group of my friends together to go birding in the Kerkini region so if this interests you get in touch.  I am a fantastic travel planner and now that I’ve done the tour of the region completely on my own, I know what to do, and what not to do.  Let’s go on a great adventure and maybe even help a few dogs and cats on our travels.

Perhaps I can donate a portion of sales of this photograph to the cause?  These puppies stole my heart at the boat launch in Lake Kerkini.  There were 4 of them, all homeless. 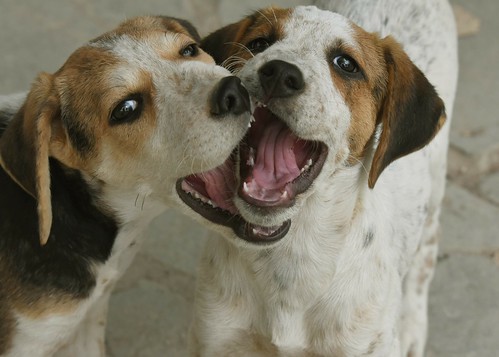