Share Tweet Pin It
Next Story: when no kill doesn't mean no kill - death and accountability in rescue →
Posted in Atlantic Canada Birding BEYOND

Following a wonderful work conference in Vancouver last week, I took the opportunity to visit Vancouver Island for the first time over the weekend.

The quest for the perfect birding location not too far from downtown Van began last fall and I quickly narrowed it down to the Victoria region after consulting the Birding in British Columbia website.

A few years ago, I spent the day with a great birder in Las Vegas, Je Anne, who taught me to study the birds of the area you are visiting in advance and this has always stuck with me.

Along the way I’ve also learned not to wish for birds, but to look for what is expected in an area for the habitat and season.

Victoria is quite warm compared to the rest of British Columbia and migration comes earlier, although by and large I wanted to tick expected species not native to Nova Scotia such as the Chestnut-backed Chickadee.

Last year I birded Stanley Park after the conference and was most disappointed that I could not locate a Black Oystercatcher, and believe it or not, a Chestnut-backed Chickadee.  So, the wish list starts there.

By Vancouver standards, quite a bit of snow had fallen overnight, and the city looked just beautiful from the Skytrain. 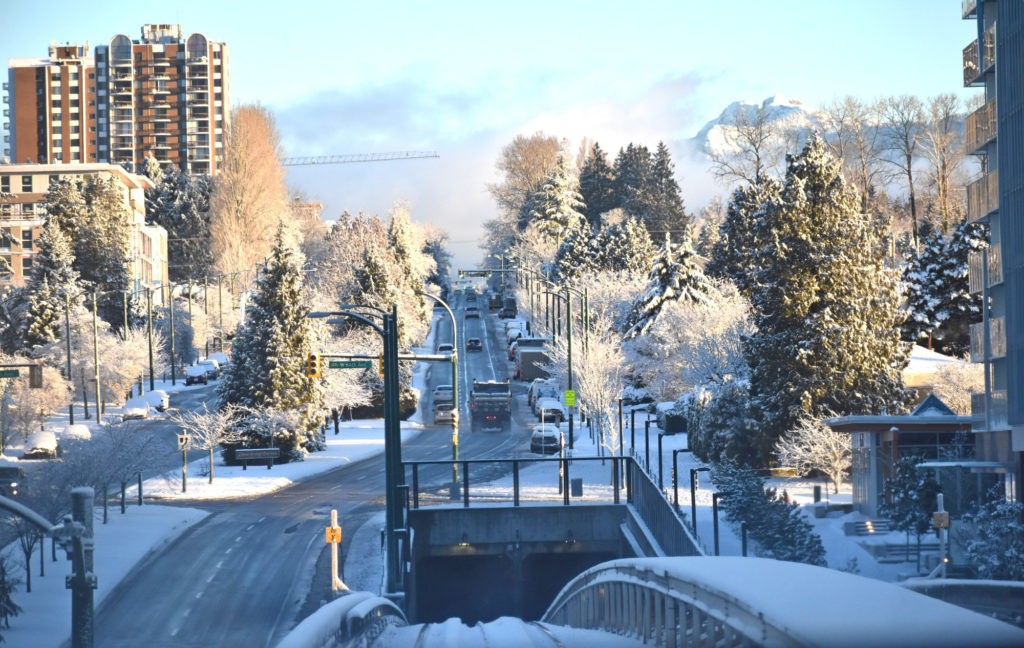 The bus ride from the train to the Twassen Ferry was quite messy as they didn’t plow, and we got a little stuck at one point but it was no big deal.  Besides, we passed a group of Trumpeter Swans in some flats on the way and it was the first lifer of the trip so I knew I was on track.  My co-worker who was also heading for Victoria, was underwhelmed by this sighting as is often the case with non-birders.   We birders are used to this and shan’t be discouraged…LOL

Once we boarded the ferry I left my bags inside with my fine friend and went outside in search of feathered ones.  I dipped on a few Alcids that I believe I missed by about a week, so I have a reason to return I suppose.

Rhinoceros Auklet and Ancient Murrelet were the two who got away.  But I did pickup many Pacific Loons in the pass, which was pretty amazing but sadly no photos as there were so many birds I couldn’t figure out who to shoot.

From the ferry I headed for the car rental place which turned out to be right on the road I’d been told to visit for Eurasian Skylarks.  As predicted they were fairly easy to hear, and just as impossible to see.  Next.

I had my heart set on finding Canvasback Ducks but believe I missed them by days.  With a heavy heart I set out to leave the Viaduct Flats but as I approached my car I heard the Robins making a ruckus and looked up to see the biggest Fox Sparrow I’ve ever seen high on a branch.  Wait a minute, is that a Northern Pygmy Owl?  Holy binoculars batman that is amazing!  Backlit, Robin-sized, and perched high my shots will not be NatGeo quality, but I’ll take it. 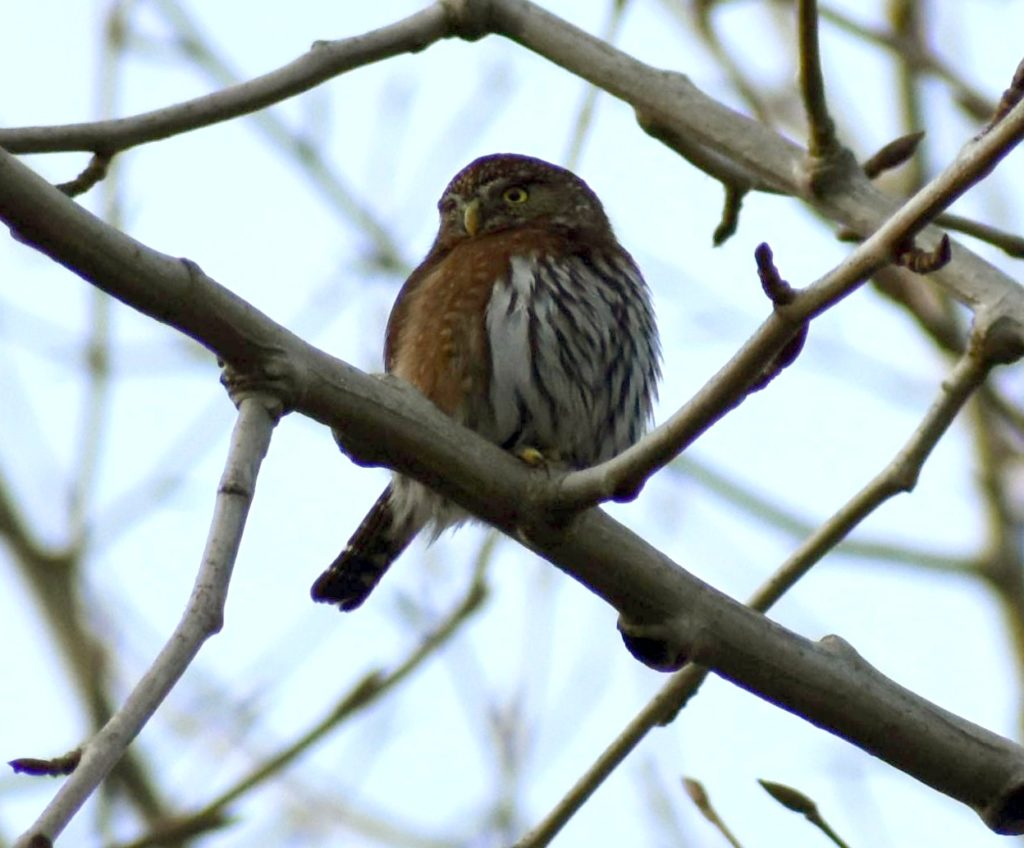 On that note, the pressure I put on myself to achieve great photos in these circumstances is ridiculous.  Riding around by myself to marshes and flats nobody who lives in the area even heard of with hardly time to stop in each place, overwhelmed by the songs of new to me birds, and changing lighting conditions, it is what it is.  I must accept that a photo shoot is a very different beast.  This is birding, and it’s all about doc shots.  Some turn out not too badly and maybe someday you get to have a bit of time to do a shoot with a favorite down the road.

Anyway, I sort of thought that was good enough for one day and was thinking about calling it a day and trying to formulate a plan for the morning.

I got it in my head pretty early on that the Martindale Flats would be the mecca of my birding time, so when I saw a large sign on the highway for Martindale Road I couldn’t resist putting in some more birding time before supper even though I’d skipped both breakfast and lunch.

Serendipity for the second time that day as I met two of the best birders from the area, Daniel and Michael, who gave me a little tour of a local hotspot in the flats and helped me located a flock of Western Meadowlarks, Golden-crowned Sparrows and Brewers Blackbirds after looking over my list.

I did eventually head off for supper with a new major nemesis on the brain.  Damn you Barn Owls, this is not over!

Sunday morning, I decided to start early right on the property where I was staying.  The habitat at the Swartz Bay Farm and the end of Land’s End Road near the ferry is nothing short of amazing.  Landed four lifers (here is my list) before I finished my morning coffee!  As well the sheer quantity of songbirds on the property is amazing and there was only one small feeder that may not have even had food in it.

There were several birds I could not identify on site that eluded me.   One was grunting and sounded large so possibly a ground/game bird?

One bizarre large sounding loud alarm call in the brush with the Towhees I never did identify.  I’ve never heard anything like it and nothing came to mind, although perhaps to locals it would be familiar.  I like a good mystery, so I’ll be back (or maybe for now I’ll just stalk other people’s eBird reports as it’s long drive from Nova Scotia).

I heard one song I would call Townsend’s Solitaire but won’t list it as I can’t be certain and didn’t locate the bird for sighting.  Heard the Vireo scold call several times so would assume it was a Hutton’s Vireo but won’t list that either.  Both are expected migrants for this time of the year, so I would not think either out of the question.  The one bird I heard very distinctly that is not expected and rejected by eBird is a Black-throated Green Warbler.  However, that is a bird I know by ear unmistakably so if it was not present then a mimic bird such as a Starling must be up to some tricks (and that is something that does happen for you non-birders).  Again, nothing like a good mystery.  I’d be delighted to see some eBird reports for this area.  Perhaps get permission to bird the property as the people who run the inn are very nice.  As well the little walking path by the highway across the street continues to be very birdy.  I can’t make it back until next year at best, but it was great to be fully immersed in the music of songbirds.  Overwhelming at first, things started to make sense as I put sightings together with songs and eliminated species and did some detective work.  My spring ears aren’t even on yet as it’s the dead of winter in Nova Scotia, so I am pleased with how things turned out overall.  Learning regional birds takes time so it’s coming along slowly for my British Columbia lists.

I had a free hour and a half for birding before meeting a good friend for lunch in Sidney, so decided to check out the Saanichton Spit.  It took me a long time to find it but it was really worth the effort.  Much of what I expected to see was not around this week (the theme of the weekend) but I got good looks at some Western Meadowlarks and was greeted by a group of 18 Northern Pintails and a number of very nosy Anna’s Hummingbirds so left pretty happy.  Next time I will dedicate more time to this area and it’s spectacular habitat.

I put an end to land-bird hunting for this trip and devoted the afternoon to search for shorebirds and seabirds.  Much dipping ensued but that is not always bad as you know.

The Black Turnstones and Surfbirds were both to be an easy catch, alas neither made an appearance.  I figured at this point I’d narrow things down to my one shoreline nemesis, the Black Oystercatcher, and was prepared to put in the rest of the time before my flight for a look at one.

As I ran out of places to search at Cattle Point, a nosey group of River Otters popped up on the rocks and that was so wonderful I thought that was the end of gifts from the universe for the day.

No sooner did I put the keys in the ignition did two Oystercatchers pop into sight right in front of my car.  Hopped out and got my photos before they flew up alarmed and back out of sight.

Honestly, at this point it’s all gravy so I took a little stroll down at Turkey Head and saw yet another Black Oystercatcher, but this time much closer.

Overall a pretty great day, and as often happens to me the minute I got in the car and started driving it started raining hard.

That is always my signal that the little portal to the birding heaven has closed for the day.

Get it where you can I say, we all need a little bit of wonder in our day.

Sixteen new to me birds for this weekend included:

Favorite photo of the weekend is not the sharpest, but it makes me smile.

Thank you, Mother Nature, for being most agreeable, and to all the lovely people I met along the way.  Until we meet again…Happy Birding.

1 thought on “Saanich and serendipity : birding the Swartz Bay to Victoria route on Vancouver Island – February 2018”