Share Tweet Pin It
Next Story: 2nd looks at some handsome winter ducks before leaving CB and a quick drop in on the Bullock's Oriole →
Posted in Atlantic Canada Birding

Robins, Robins everywhere and what must people think?

On two recent occasions I have bumped into non-birding friends while out birding.   It was clear to me they thought it was rather eccentric, my behavior.  So I can’t imagine what they would think had they seen the large group of us today that converged on the cemetery full of enthusiasm and armed with optics.

A very rare bird to us (but a British garden bird so not rare at home), a Redwing from Eurasia, had made an appearance the day before at the Pleasant Hill Cemetery.  As a result, most of the local hard-core bird nerds make the trek out to have a look.

The bird had shown up with a large flock of Robins, who are also a type of Thrush so every Robin spotted lit up the group for a little chase and scope.  One great side benefit from looking for a rare bird in a flock of common birds is that you really get a chance to study your common birds in depth.  We know our Robins well now…oh boy.  Alas no Redwing sighted for us right up until dusk, although it had made a brief appearance early in the morning for someone we heard.  It will be sighted again I’m sure, but perhaps it has moved on to another spot in the area with better berries.

The Pleasant Hill Cemetery has long been a hotspot for local birders as it has the perfect habitat for migrants who have stayed on too long and need some cover from the elements.

In fact, a Yellow-breasted Chat is still there that I had not managed to get a good look at in the fall so I took the opportunity to get another look and a good ID shot.  The poor little thing will likely not survive winter and has already lost some tail feathers to the elements but as my friend said yesterday “it already failed its first test” when it didn’t get the migration right.  Some birds “will not breed successfully” as they say.  The Sharp-shinned Hawk who was flying about may have something to say about it all as well.  Nature is not to be argued with I figure. In picking through the Robins we did find several other birds such as Cedar Waxwing and Purple Finch and my bird lesson for the day was to notice how much smaller than the Robins the Cedar Waxwings are.  When seen alone I had always thought them much larger than they actually are.

A Mew Gull (aka Common Gull) which is not actually common in Nova Scotia but not rare per se, has been hanging around across the street from where the Redwing was spotted so most of us took a jaunt across the street to get a good look at him.  I had seen one before in Dartmouth two weeks ago but at that time it had to be pointed out to me so I was pleased today to be able to recognize it quickly on my own.  Easily missed in a group of Ring-billed Gulls but quite different upon closer inspection with a number of reliable field marks. 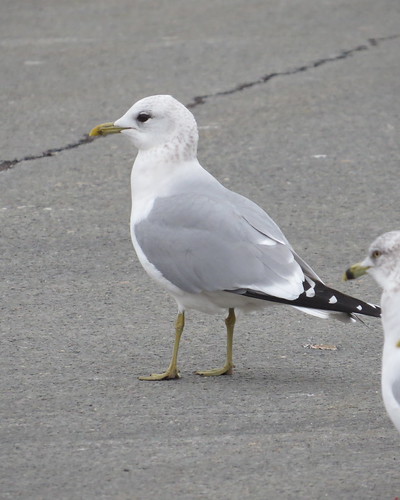 The Gulls frighten me a bit as they’ve been known in certain locations to attack and injure both pets and people, but even in the bread frenzy these gulls seemed pretty tame.  For me it still felt like a bit of a Hitchcock moment, but the photo opp was worth it I suppose. Although there was no Redwing sighting to be had I was happy to spend the day with birding friends in the field.  Very often the people are the best part of birding  🙂